The final results are in, but the R/C here does not publish them online until the awards party is over, apparently.

We had a fantastic race. We got a little slow near Little Sable, and that is what killed us. The boats who took the outside route, or went north of rhumb, or split from the pack and convention wisdom and went outside the Manitous, did the best.

We finished 11th or 12th in our section, but with our handicap, we were 16th overall, I think.

I'll be posting pictures and a full recap in a day or two. We had a fantastic time; in 10 Mac races, I've never had a race where I wore nothing but shorts the entire race (with a light sweatshirt from 0200-0600 or so.) We had amazing winds for the run up from Gray's Reef to the Island (I think it is about 30 miles, we did it in under 3 hours. Amazing.) Clear skies and shooting stars at night, sunshine and great times on deck during the day... What a race! 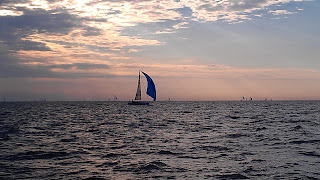 Well, getting close to Race Time!

This Saturday, July 21st, Maskwa will be starting at 1210 on another Race to Mackinac. Personally, this will be my 10th race; Manny, our own Old Goat, will be racing his 28th, Don is on about 14, and on down the line.

4 days to go. Maskwa has a 1st in the Queen's Cup, a 2nd in the NOOD, a 2nd in the Chicago - Waukegan… we're race ready if we ever have been. Pray for strong (Maskwa favored!) winds, and a safe journey.

Don Waller (The Bear)
Manny (Peruvian War God)
George "Splash" Chlipala (claim to fame-- only person thrown off the boat by the boat.)
Ute Tegtmeyer ("It depends")
Carly "Jaws" Power (When she leaves her mark on the boat, she really sinks her teeth into it!)
Ryan Sadowy (famous quote from last year "Everyone talks about the weather; this isn't so bad" right before the 100mph winds hit)
Nicole "Sophie" Stanton-Louviere (Leaving us for Florida… but still a Maskwa girl!)
Lynn Kozak (Jetting in from Montreal for the race, only took us 10 years to steal her from Salsa, and now they sold the boat.)
Me (nothing special here.. move along… more along…)

I think the picture says it all--- 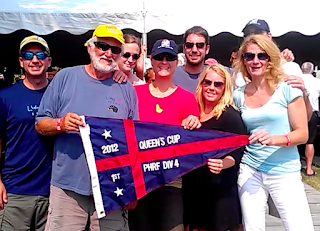 So how did we get there?

Friday we met at the dock in Milwaukee, Maskwa all ready to go. Don and Anthony had delivered her up overnight on Thursday, and then Ryan, Ute, George, Sonja and I took trains up later on Friday.

The weather forecasts had called for mostly calm. High winds were expected to be about 8-10 kts, max, midway across the lake. We were a little worried that this would become a drift-fest, and we know high winds favor us, especially with this strong a section (under PHRF, we were tied as slow boat in the section. Most of the faster rated boats have big jibs, and in light air that gives them quite the advantage. We are better looking, though...)

However, when we motored out for the start, raised the sails, and started working the start line, there was plenty of wind.

Starts were on 10 minute intervals, and we had a good 30 minute clock running.

We started towards the high end of the section; Section flags were actually start sequence flags, so we were mixed in with the section faster than us. Any way you look at it, we had a great start, close to the line but no real danger of going over; Ryan called his first big start, ("43 boat lengths from the line, Don!") and we were off and racing.

We maintained our position high of our section, and then of the fleet, throughout the evening. Slowly boats from a faster section would creep up on us, and we ended up high of just about everyone, except for Momentous (J109) and Nighthawk (C&C115, and our prime competitor.)

'High,' in this case, meant south of the fleet. Winds were out of the South at about 8 kts. Even though when we had looked at the weather, this felt like the right course, even though weather was moving in slowly from that direction (We watched the storms all night and morning... we never had a single raindrop.)


Night fell, and we settled in for some good sailing. Maskwa was humming right along, we were averaging about 5 knots, and we had all hands on deck for the night. Not necessarily awake, though. Clip on to the jack line, and nap on the rail.


Eventually, the winds started to clock around to be more southerly. We changed from our #1 to the JibTop, thinking we would get maybe 1/2 a kt out of the deal, but every time the wind clocked a little bit further south, it increased; we picked up 1.5 - 2 kts every time. We had the JT up for a good half hour or so, and then the wind came forward-- we went back to the #1.


We traded sails every now and then, eventually settling in with the JT and us hiking out on the high side; we had 8 kts of boatspeed consistently, and started to see a regular dose of 9.0 and 9.2. With only 4 of us out on the rail, some of the gusts were a little strong. We probably had that sail up for a good 5 hours. We were really delivering the mail now.


We heard the sleds start to call in their finishes, and we knew that flying along as we were, we would not be that far behind them. We picked out a few of the lights, and started shooting bearings from other boats, and we were passing boats at quite a clip. The problem, is that at night, you don't know if you are passing that boat you owe 120 seconds/mile, or someone from your own section. You just have to sail fast, and stay that way.


Let's say the first 14/16ths of the race was excellent. We were about to have a 'moment.' We were 4 miles out or so, and the wind shut off. It was just like closing a curtain. We were zipping along, telling jokes about how slow 7.5 kts felt, when... suddenly we could only make 5. And then 4. And... it kept getting worse.


In short order, we were bobbing about, half a knot of speed, but in 3 foot seas. We were trying not to destroy the new main sail, but we were still racing. And then... the fleet started to catch us. We had watched Nighthawk fall further and further behind... we could see their red a-sail slowly getting larger. And if they were catching us.... who else was? This is where we were as dawn broke.


There was just no getting over it... we were going to have a repeat of the week prior, when we managed to catch everyone up front, and then boats were going to go flying past us, seeing the hole we were in.


And yet.... and yet... somehow... we managed to keep moving. A few nearby boats had some way, and we were managing a good 2 kts directly towards the finish thanks to the waves. We had room, and we needed a sail to catch the lightest winds. The wind had moved, also.... we were directly up from the finish, making it a dead down run.


We hoisted the big chute, dropped the JT, and slowly, painfully, worked our way across the remaining miles. It is very painful to hear the sails flogged like that. 3' seas and no winds... ouch.


And then there was a puff of wind. We could gybe and get closer to the finish. We gybed. Slowly we overran what little wind we had. We gybed again. We could see 1 or 2 boats getting a little power, and George and I could feel the wind again...


We got back up to speed... then we were doing 4 kts, had plenty of way, and were making a bee line for the finish.


We got the finish signal, yelling a few congrats to each other, and then started dropping our gear to motor in. As we came into the harbor, the only boats we could see from our section that we knew about ... were almost none. Liberte was there... but we didn't know how long she had been there. Could we correct over her?


A few hours later (and a drink and a nap later,) they posted the uncorrected finish times. George and I grabbed our section list, and started ticking off boats. When we finished, we had accounted for all boats in our section, and only 1 finished ahead of us scratch, and Liberte owed us almost 7 minutes; she had beaten us across the line by 3:39.


1st Place in The Queen's Cup.


It was a great crew we had that night. Everyone pulled their weight, and more! We all took turns at different positions on the boat, just to give each other a break.


It was a great night, and a better morning. 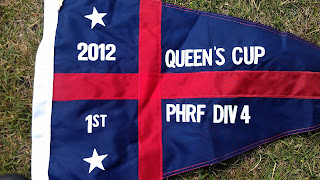 Email ThisBlogThis!Share to TwitterShare to FacebookShare to Pinterest
Newer Posts Older Posts Home
Subscribe to: Posts (Atom)
Maskwa is a C&C 115, built and delivered to us in 2005. She is hull #8 (One of Don's lucky numbers,) and is our racing home during Chicago's intense sailing summers. We are far more like a family then your normal racing crew; we enjoy bringing newcomers out, we play together in the off season, and generally have a good time. Safety, Good Sportsmanship and Fun are the words we live by on the water. Oh!, we like to win now and then, too.