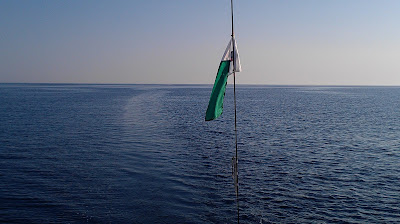 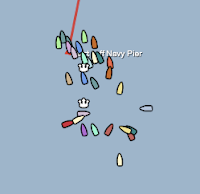 Ok, it was neither. It sure beat doing anything else for 72.5 hours, but it was a bit long and hot.

We hit our start right on the starting cannon. Perfect, except we had bled off a little too much of our speed, but I would say Mary Ellen called the line perfectly, in any regards. In this picture, Maskwa is the orange boat bumping the letter "N" in "Navy Pier." You can see roughly where the starting line would be (This was a few seconds after the start.) The red line is the Rhumb Line (most direct course towards the finish.) (land not included.)

This is a problem that has plagued us consistently with the boat; we just get creamated in light air. The slightly older boats with their 155 Gennies just scoop up that much more air to use to sail. If you look at the PHRF boats that tend to do well in light air, you will usually see that they have masthead overlapping jibs. That's just the way it goes.

Maskwa really starts to heat it up and come alive around 8 kts of wind speed. Between 5 and 8 we kind of wallow a bit, and below 5 we are forced to really put some heel on the boat to lay her over with no pressure in the sails.

They were using the Off Wind handicap from ORR, which puts us at a wild disfavor over some boats we regularly race against. For instance:

Under LMPHRF, we rate a "72." Our 0.917 rating for OW ORR means that for all the time we race, our corrected time will be 91.7% of what we sail (kind of like a major league batting record, except fast boats can score higher than 100%.)

Here is how those 2 handicaps play out head to head. We race against Spitfire all the time; we pretty much know if we should be passing them or yielding to them.

Let us suppose a good 40 mile race; we race across to our destination, and Maskwa and Spitfire finish at exactly the same time. There is no doubt, there is room for more than 1 boat in the finish line, it does happen.

We average 5 kts, finishing the race in 8 hours (because we want to play nice with the math.)

Here is how those races would finish scored under both systems: 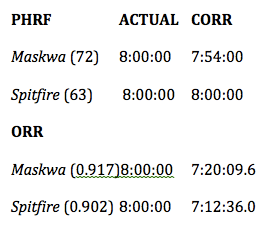 Now, PHRF also has a Time Over Time scoring system that can be used as opposed to a Time Over Distance system, but you get the idea.

One of the problems is that it scores you over total sail area available, and we have a massive spinnaker, whereas Spitfire has a little fractional chute. When we are going downwind, we have quite a bit more sail area. When we go upwind, however, Spitfire does lose some sail area, but Maskwa loses quite a bit more.

Another consideration that was brought to my attention some time ago was that ORR also bases a high percentage of their handicap 'weight' on having 20 kts of wind over a large section of course.

Considering that we never saw more than 10 kts of wind the entire 333 miles of the race, It is hard to justify that formula. True, we can best many of the big jib boats sailing with 20 kts upwind; we are still carrying our full jib, and they have most likely gone to their "2" or even their "3" by that point. (We would probably have our "2" up, but it is just a heavier, less roachy "1." Great sail, and our favorite upwind sail... we know when we are carrying that sail, we are probably passing boats.)

Having said all of that----

Every handicap system has a failure or three. One Design racing seems like the most simple, but even then they have to ok sail purchases, design changes are not permitted, etc, and people still cheat! How lame is that?

So we have to live with what we are given, we have to race the wind we have, not the wind we want. And this was certainly a race where we wanted more wind!

Scott
Maskwa
Posted by Scott at 00:54